In the on-going fall-out from a vile newspaper column against Meghan Markle written by the UK TV host Jeremy Clarkson and published in the Sun UK newspaper just before Christmas (see my earlier post on this story) Mr. Clarkson took to Instagram on January 16th 2023 to tell his followers he was apologizing again for his 'horrible' comments against Meghan.

Clarkson told his Instagram followers that he had emailed Meghan and Harry (on Christmas Day no less!) to express his apologies directly to them. Clarkson said that he was profoundly sorry for his column "from the balls of his feet to the follicles on his head"  and adding that he wrote the offending article in a rush without following his usual editing routine.

Clarkson denied being sexist and said he abhorred violence against women (his column had suggested we carry out acts of violence against Meghan) and Clarkson pondered why when people apologies these days, such apologies never seem to be enough.

Around the same time as this latest (half-arsed) apology Variety Magazine wrote an article that according to their sources Amazon Prime streaming service would not be working with Clarkson beyond current seasons of TV shows “The Grand Tour” and “Clarkson’s Farm” that have already been commissioned. Something we take to mean that Clarkson is being dropped by Amazon Prime.

This did not end today's story

Later in the day Meghan and Harry, through a spokesperson, responded to confirm that Mr. Clarkson had sent an apology on Christmas Day, saying the apology was (a) marked private and confidential (explaining why this was the first we were hearing about it and then only because Clarkson told us about this private communication himself) and (b) the apology was set to Harry and NOT to Meghan. 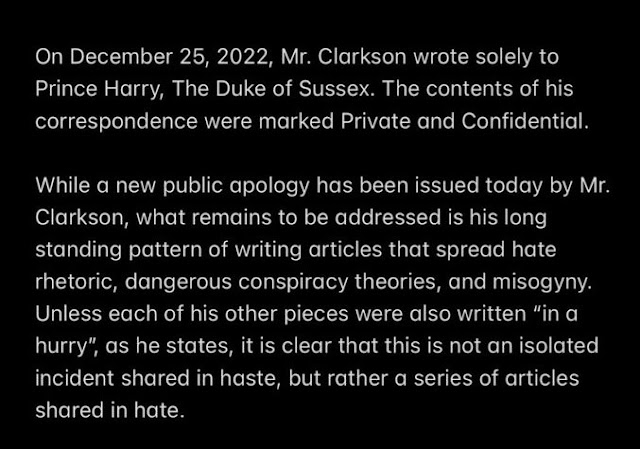 I read into Harry and Meghan's statement that they are rejecting Clarkson's second PR driven apology attempt. For sure, Clarkson continues to try and make himself out to be the victim in the story.