In a move that have left Meghan Markle fans and Meghan trolls equally disappointed, a report by privately hired lawyers acting for the Queen into allegations that Meghan had bullied staff when living in the Royal household will not be released to be public. Instead, per an article in the UK Sunday Times magazine, the palace will be revealing new HR procedures in their upcoming annual Sovereign Grant report. The article goes on to report (though not as a direct quote) that the contents of the report will be kept private to protect the people who participated in the probe. 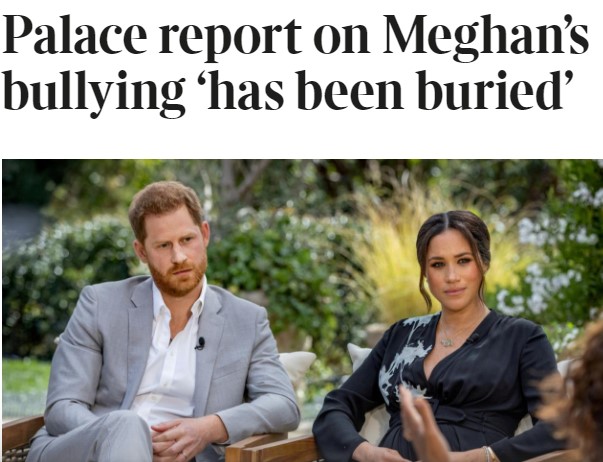 News of the allegations surfaced in the press just days ahead of the airing of Meghan and Harry's 2021 interview with Oprah Winfrey and were taken by Meghan and her fans as being a pre-emptive smear campaign against her. At the time Meghan, through her lawyers, had apparently requested to see copies of the allegations, to see copies of all letters, emails, texts etc. which contained details of what she was alleged to have done. Meghan's lawyers denied the claims and previous colleagues of Meghan's took to the press to say they had always found Meghan to be polite and respectful to work with.

It is still unclear if Meghan received details of the allegations against her and /or if she was given an opportunity to participate and respond to the Queen's investigations.

The end result of not releasing the report is that 'both sides' - that is the pro and anti Meghan camps - are left to speculate about the findings of the investigation. Releasing the report would have brought clarity and would have resulted in the matter being brought to a close, either with a finding of no untoward behaviour by Meghan, or if the investigation concluding Meghan had acted inappropriately, she and her accusers could have 'dinged' things out in court.

One of the people who raised the bullying claims was former aide Jason Knauf. He worked for Meghan and Harry before going on to work exclusively for William and Kate. It was Jason who (presumably with William's knowledge and blessing) and after he made the bullying allegations, gave a private internal email between Harry and Meghan and he to the court, knowing that it would be used against Meghan during her successful civil suit against the Daily Mail. Clearly Jason and / or his principals had an issue with Meghan beyond how she treated her staff.

The failure to release the report will cause this story to run and run as each side continues to push their narrative of events. The soon to be released unofficial biography of Meghan by Tom Bower in which he promises to tell the 'whole truth' about Meghan and the 'people she has stepped on' on her rise to the top will most likely touch on this topic. One wonders if the Palace knew this to be the case and are happy to let Bower run the risk of being sued for whatever he decides to publish. Having someone else (once again) clean up a Royal Family mess.