Day 2 of the Invictus Games The Hague started off bright and early for Meghan and Harry. They stopped in to meet the GB Team and staff at the British Embassy in The Hague. Then the fun got going on the event grounds with the first competition of the Games, the Jaguar Land Rover challenge course.

Team competitors had to navigate an obstacle course driving off-road Land Rover jeeps, and with the course designed to test each team’s driving skills, their precision, the level of teamwork and navigational ability. Team France were the winners. 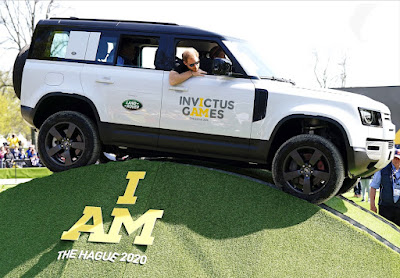 Meghan and Harry smart yet casually dressed in their jeans and wearing sunglasses watched the event with Harry then jumping into a Land Rover with members of Team GB and taking a trial spin around the course. Harry helped to navigate, sticking his head out of the passenger side window. Harry must have liked the experience as he went around a second time. Meghan cheered on from the sidelines.

The competitors’ children were not left out of the fun. There is a much smaller and flatter version of the Land Rover Challenge course for pint sized children to drive. Meghan and Harry were chauffeured around the children’s course in open top miniature Defenders. Meghan was taken around the course by five-year-old French girl Mya Poirot and Harry meanwhile was driven around by four-year-old Dutch girl Scarlet Vroegop. The children’s driving skills were impressive, and given their important cargo, they showed no signs of nerves. 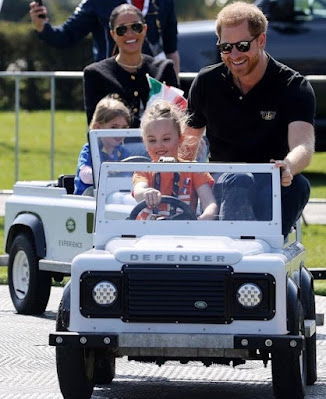 Later in the evening was the official opening ceremony in the 5000-spectator mobile theatre that was built especially for the occasion. The event was a multi-media show with music, dance and speeches. The event started with the 500 competitors from 17 countries entering the theatre followed by Meghan and Harry and with a yellow, empty chair symbolizing the absence of those who should never be forgotten. 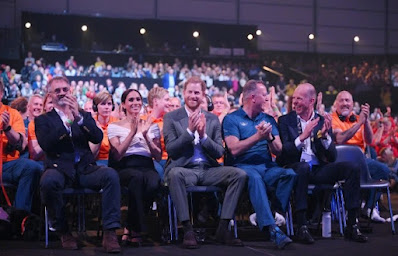 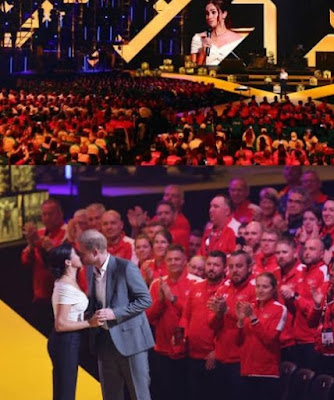 First Harry thanked the people of the Netherlands, its government, and the Dutch Royal Family for hosting the Games and for making everyone feel welcome. After a special mention to Team Ukraine for their bravery in coming to the Games, Harry’s reiterated both his and the Invictus communities support for the country of Ukraine, saying “we stand with you but still you deserve more from us." He hoped that the Games would allow Team Ukraine to use their voices to tell the world what is taking place in Ukraine.

Then Harry, as only Harry can, spoke from his heart expressing his respect for the Invictus Family. He spoke of the “heart of the warrior beating strongly”, of the strength of the courage of the competitors. Harry spoke of how Harry reminds his son Archie to show strength of character. Harry said nothing would make he and his wife prouder than for Archie, when he grows up, to show the same character as the competitors at the Games, their resilience and their heart. (Cue tears).