Prince Harry issues law suit against the Mail on Sunday

Breaking today is news that Prince Harry has filed a law suit against the UK Mail on Sunday Newspaper that is owned by Associated Newspapers. This is the same newspaper group that Meghan Markle successfully sued.

According to the Royal Reporter Omid Scobie Prince Harry is suing over what Harry sees as defamatory reporting by the newspaper group, claiming that Harry lied when he said that he had offered to pay the UK government for police protection for himself and his family if and when they travel to the UK, and because the newspaper also falsely claimed that Harry was trying to hide his ongoing litigation against the UK's Home Office.

The Mail on Sunday initially printed what they called a "World Exclusive" breaking news of Harry's court case against the UK Government, then they followed this up with other news reports where the newspaper printed what Harry sees as false allegations against him. A Mail on Sunday Assistant Editor, Kate Mansey repeated the accusations against Harry on her personal Twitter account.

An example of the newspaper reporting is below: 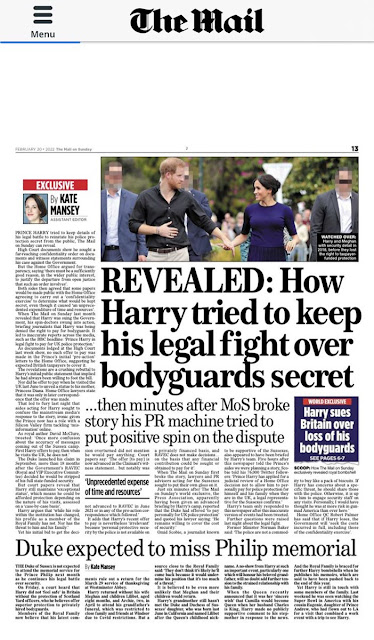 This is one of the Tweet's by Ms. Mansey

Kate Mansey
@KateMansey
·
Feb 20
NEW: Harry wanted a confidentiality order on his court battle with the UK government… And when I did break the story, his spin machine briefed friendly journos first with a gloss that led to inaccurate headlines. So much for ‘tackling misinformation’… #royal