Prince Harry is challenging a UK Government decision, denying him UK police security when in the UK, Harry is willing to pay the costs for the security

According to a news story leaked to the UK Mail on Sunday / Mail Online Prince Harry has entered into pre-civil court proceedings against the UK Government, with Prince Harry seeking to have UK police security provided for he, Meghan, Archie and Lili if they travel to the UK - with Prince Harry saying he is willing to meet the costs.

It is Harry's position that his private security team does not have adequate jurisdiction abroad, and given the threats that have been made against Harry and Meghan, he and his family are unable to return to his home (to the UK) as it is too dangerous for them. 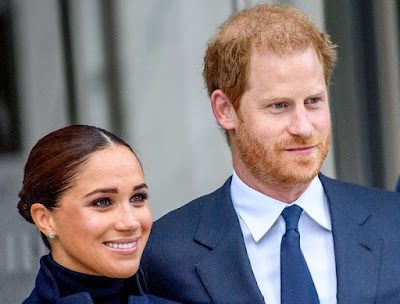 According to an article by the BBC, the legal challenge follows a security incident in London last summer when Prince Harry's car was chased by photographers as he left a charity event.

A statement said "Prince Harry inherited a security risk at birth, for life. He remains sixth in line to the throne, served two tours of combat duty in Afghanistan, and in recent years his family has been subjected to well-documented neo-Nazi and extremist threats."

You only have to look on social media to see the extent of the racial slurs and offensive comments that are constantly made against the Sussexes. These can easily turn into actions.

Harry is taking the position that his private security team cannot replicate the work of police protection in the UK, who have access to local intelligence and legal jurisdiction.

It will be interesting to see how this story plays out, and to compare it to the security that may, or may not be maintained, for Prince Andrew whom the Queen recently removed from the "Firm."

The news reports state that the Queen has been made aware of this action by Prince Harry.

This is the full statement from Prince Harry's spokesperson: 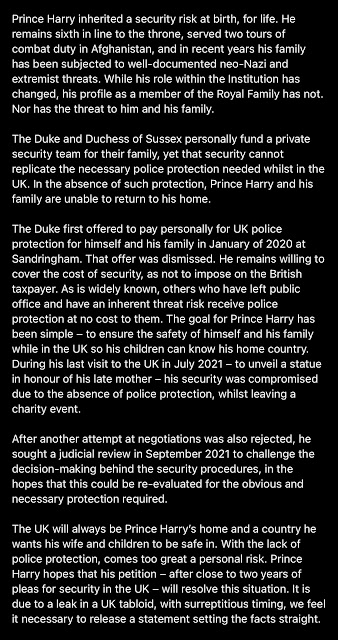