Within minutes of a social media Tweet by Royal Suitor / R.S. Locke @royal_suitor Meghan and Harry supporters are spending thousands of dollars purchasing much needed winter coats, footwear, clothing, craft supplies, and other items for refugee families who recently fled Afghanistan, and who are being housed at five or more military bases across America.

The Tweet followed Meghan and Harry's visit on Veterans Day to Joint Base McGuire-Dix-Lakehurst, New Jersey where Meghan and Harry had lunch with active servicemen and servicemen, and when they also met with Afghan women and children.

In an article published in the Evening Standard Newspaper we learned that the New Jersey military base is currently home to some of the 10,000 Afghan refugees who are being supported by the Department of Defense, and by volunteers from the veterans organization Team Rubicon, until such time as the families can be found permanent homes.

During their visit, Meghan and Harry stopped by a classroom full of children learning English, whereupon Meghan and Harry interacted with the children including joining in an impromptu rendition of the children's song "Head, Shoulders, Knees and Toes" which is apparently one of Archie's favourites. 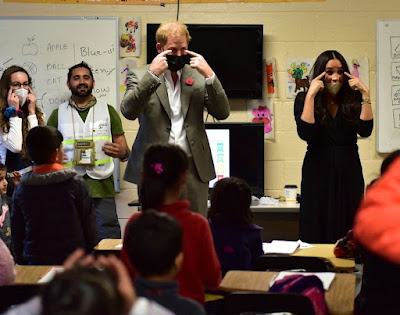 Team Rubicon have posted links to "Wish Lists" where people can purchase supplies, through Amazon, that will be sent onto the various military bases housing the refugees. Items to be purchased start at a modest $8.00, and with each list adapted to the particular needs of the military base where the guests are staying.

Meghan and Harry's supporters are re-tweeting the Wish List amongst themselves, and many have stepped-up to the task, encouraged to put some of their Meghan and Harry energy to support this cause. 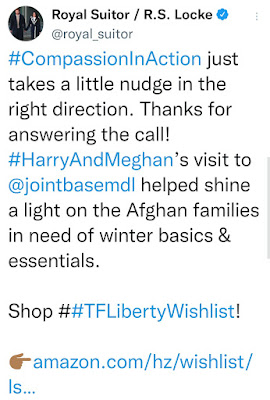