Prince Harry honours servicemen, women and vets. at the Salute to Freedom Gala in NYC & other news

Listen to my latest "Kind thoughts for Meghan Markle" podcast to hear news on recent events that Harry and Meghan participated in.

Stories covered in this podcast are:

1. Prince Harry's participation in the WIRED – RE: WIRED conference,  when he was part of a panel discussion about the dangers of misinformation and hate speech in the media, whether printed or on-line. What are super spreaders?

2. Harry's and Meghan's appearance at the Salute to Freedom Gala in New York City, when Harry had the honour of being asked to present the inaugural Intrepid Valor Awards, and the  heartfelt speech Harry gave in support of all veterans, servicemen and servicewomen, and recognising in particular those dealing with mental and physical injuries as a result of their service. 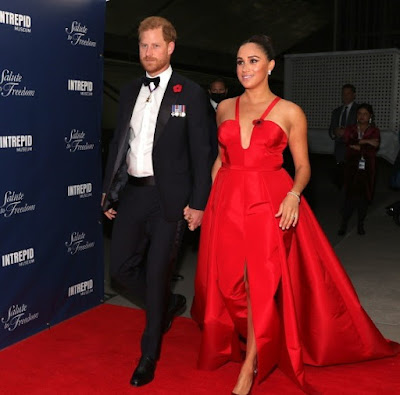 3. And,  the continuation of the UK Court of Appeal case in which Associated Newspapers are appealing Meghan’s win against them, with new evidence revealed which does not help Meghan's credibility, but which may not be relevant. Meghan's lawyers started to make their arguments in the appeal.