There was much interest from cities and countries offering to hosts the Invictus Games 2025, with 3 of these bids making the shortlist. After the Hague Games taking place in April 2022 and the Germany based Dusseldorf Games in 2023, there was a wish to move the 2025 Invictus Games outside of Europe. 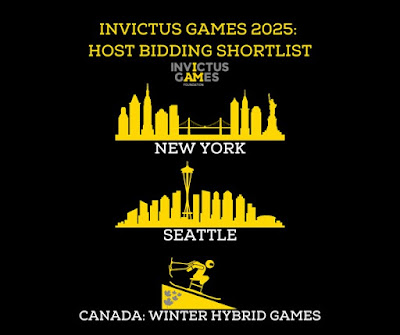 The Invictus Games Foundation announced today that 3 bids are going through to the next stage of the process: the cities of New York and Seattle and a Winter Hybrid Games option based in Canada.

The intent is to make the final selection and announcement early in 2022.

Lord Charles Allen, Chair of the Invictus Games Foundation, said, “To receive such a range of very strong bids is a testament to the ongoing support from the participating nations for the Invictus Games and what they stand for, including the enduring impact of international sport recovery programmes for our wounded, injured and sick service personnel and veteran community."

The Winter Hybrid option in Canada is a novel bid and would include outdoor winter sports for the first time offered alongside existing core and team sports.