British Vogue are continuing their annual tradition of celebrating the 25 women they see as Shaping the World. Both Meghan Markle and the Duchess of Cambridge have made the list in 2021, together with 23 other women who Vogue see as being influential in their respective fields. 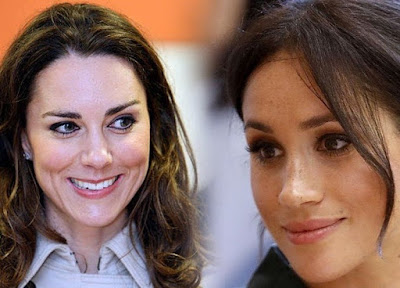 Meghan is described by Vogue journalists as being one of the most talked about woman in the UK over the past 12 months and as a woman with her sights "firmly set on making positive waves in public life." Since moving to California Meghan has not stopped working be it with hers and Harry's deals with Netflix and Spotify and their on-going charity work. Vogue asks us to consider "What will she do next?"

The Duchess of Cambridge is included for her charity work since the pandemic began including the launch of her major campaign around early-years development and her continuing work with Prince William trying to lift the stigma around discussing mental health. Vogue describes Kate as now being "the most popular member" of the Royal Family.

Maybe in choosing to include both Meghan and Kate, UK Vogue are hoping to appease the fan clubs of both ladies who are very vociferous on social media?