Check out men's style and fashion magazine GQ UK (make sure to check the UK version) to see two dads, a.k.a. Prince Harry and Patrick Hutchinson, chat about everyone doing their bit to work towards racial equality. 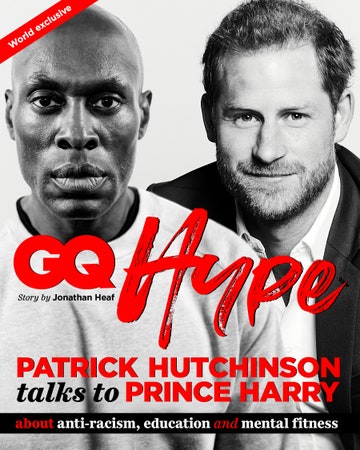 For those reading my blog who are living outside of the UK, personal fitness trainer Patrick Hutchinson became an 'accidental hero' this past June in what became a defining moment in the Black Lives Matter protests in London, UK, when he fireman style lifted a white protester out of the melee and saved the man from being trampled and seriously harmed.

So what you might ask? Well the white protestor had been protesting against the people of colour - not with them. The photo of Patrick carrying the injured white protester garnered worldwide media attention.

Patrick, a father and a grandfather who says he was raised by strong black women, and his friends Jamaine Facey, Lee Russell and Christ Otokito, have since started an initiative called Utcai to promote Change and to Inspire a move towards real racial equality.

Patrick says "as fathers we just want things to be fair. We want everyone to get the same shot at opportunities regardless of their race. I'd love to see our young children, grandchildren, nieces, and nephews have a better world than I have lived in. And a better world than my mother and my nan lived in. We have an opportunity to be heard, and we're going to take it. "