The reasons of Mr. Justice Warby’s decision on a procedural motion in Meghan's case against Associated Newspapers were made available today on the High Court's website. His honour found that for the 'time being at least' the names of the 5 friends of Meghan who gave a story to the People Magazine, can remain confidential. The judge also wants the case to move forward more promptly to trial.

The decision the judge had to make was whether the 'open court principle' that allows information about court cases to freely available for all to read to enable public scrutiny of the workings of the law, outweighed the desire for Meghan to keep the names of her five friends confidential. It was uncontested that these friends had provided a story to People Magazine on condition of anonymity. 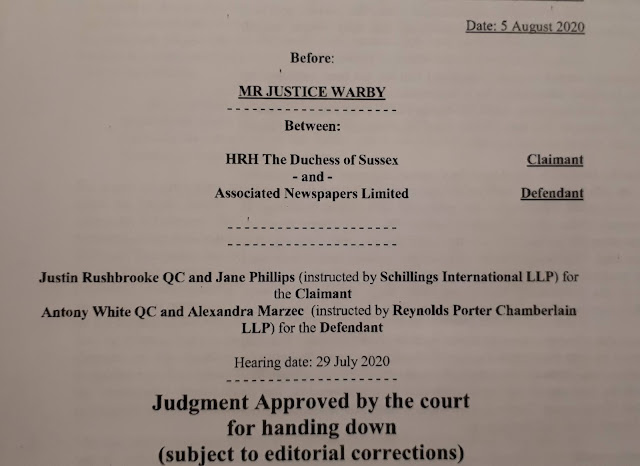 Both sides of the case came in for criticism by the judge for playing out parts of their case through media sources, and their 'tit-for-tat' criticisms of each other for publicising details of the case.  Meghan's team were accused of releasing legal documents to royal reporter Omid Scobie shortly after her legal papers had been filed with the court. The newspaper were admonished for printing large parts of their court pleadings in 'splash and spread' stories both on-line and in print, prior to having filed these documents with the court.

The judge noted, somewhat ironically, that it usually the newspapers who are trying to protect their sources and in this case the roles were reversed.

In the end the judge decided that the newspaper had not provided any convincing arguments why revealing the name of Meghan's five friends would have any real value in advancing the administration of justice / open court principles at this stage of the case. He stated that generally, at the pre-trial stages of court proceedings, it does not help the interests of justice if those involved in litigation are subjected to, or surrounded by, a 'frenzy of publicity'.

Check out my podcast for more details on Meghan's Court case.