Duchess of Sussex set to interview Emily Ramshaw, CEO and Co-Founder of The 19th* , a US digital news platform.

Digital News platform The 19th* is hosting a virtual summit between August 10th and 14th. There will be a host of powerful women speakers at the summit, including Hillary Clinton, Stacey Abrams, Melinda Gates, various US Senators, actress Meryl Streep, and Meghan Markle. It is free to attend.

Meghan is set to interview the CEO and Co-Founder of The 19th*, Emily Ramshaw. Emily was previously editor-in-chief of the Texas Tribune, an award-winning nonpartisan digital news start-up. She serves on the board of the Pulitzer Prize. 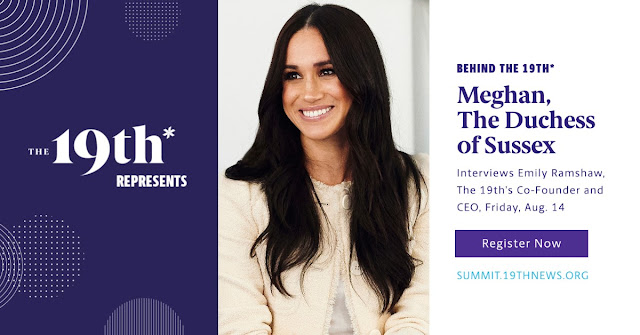 So who are The 19th* and what are they all about?

Per their website a century ago, the 19th Amendment to the U.S. Constitution made voting, the country’s most fundamental mode of civic participation, a right regardless of gender. But this watershed moment in America's democracy excluded millions of women, including women of color, from the ballot box for generations. The reality is suffrage remains a work in progress for many in America, particularly women living in states where voter suppression exists and tens of thousands of transgender Americans who face barriers to voting.

The 19th* goal is to empower those they serve, particularly women, people of color, and those historically underserved by American media, with the information, resources and community they need to be equal participants in America's democracy.

Journalists try to report in a non-partisan manner. They aim to advance human rights, civil rights, racial justice and gender equity through storytelling that exposes disparities and empathizes with the lived experiences of those they cover.

The 19th* is a non-profit newsroom supported by a mix of membership, philanthropy and corporate underwriting.  All of the money raised goes back into journalism and they list all donors and corporate sponsors who’ve given $1,000 or more on their website.

I can foresee lots of talk at the summit about the importance of voting at the US 2020 elections and encouraging women to enter politics.