Dilemma for the Duchess of Sussex - how does she handle her friend's offensive comments?

Unless you have been in social media hibernation for the past two days you will not have missed Canada's Jessica Mulroney's rapid fall from grace due to her power play / white privilege tweet to black influencer Sasha Exeter. Jessica's tweet has been described as 'tone deaf' coming in the wave of the Black Lives Matter movement, with people and corporations around the world acknowledging that racism is no longer going to be tolerated, and what's more, that they have to seen and heard to take a stand against racism.

Jessica has since apologized to Sasha and to her followers, but was immediately fired by Hudson Bay, ABC media, and her TV show was removed from CTV (part of Canada's Bell media) and Netflix.

Jessica has been a close friend of Meghan's prior to Meghan meeting and marrying Prince Harry. Whilst Jessica's comments are not Meghan's nor are they reflective of Meghan's position on racism, Meghan will still have to decide how she deals with her friend's offensive comments. Not easy for Meghan as whatever she does will be torn about in the media and could also impact her on-going legal case against the UK tabloids as Jessica is likely going to be a witness in that case. If Meghan drops Jessica as a friend, Meghan will be accused of 'ghosting' her friend or of being cold hearted. Supporting her friend may risk the ire of black men and women everywhere, as Meghan could be seen as defending Jessica's words. 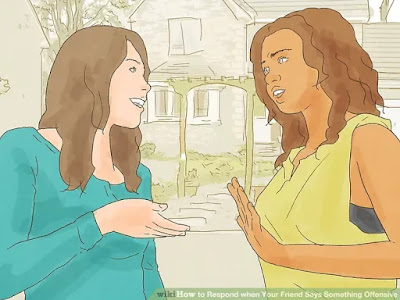 For those of us with friends who have done similar things, there is a great Wiki page "How to Respond When you Friend Says Something Offensive" most of which involve talking the issue through with your friend and sharing with them why it bothers you. The friend may or may not accept what they said was wrong. The friend may or may not change. Depending on your friend's response you may have to decide do we remain friends?