I hate to compare Meghan and Kate. That whole feud thing is way over-sold and it has led to a whole slew of on-line bullies. But really Palace officials, step back and look at the optics of what you did today. Objectively you do protect Kate better than you did Meghan.

Unquestionably, Meghan was targeted by the UK tabloids who got away with printing many false or exaggerated stories. The Palace did nothing. No doubt Palace aides were telling Meghan that it would all blow over. Probably advising her, as an American, she had to learn the British way and keep a stiff upper lip. 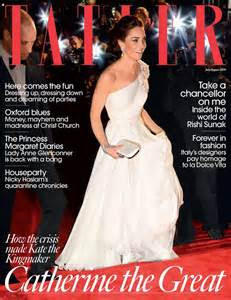 Compare this to today's response by the Palace to Tatler Magazine’s story "Catherine the Great." The story probably contains some untrue comments attributed to Kate, and likely the story exaggerates how she is assisting in improving Prince William's public image, but on the whole the story is mostly supportive of her.  The article is not always flattering to Kate but neither is it totally inaccurate*. Nevertheless, on this occasion the Palace steps in, issuing a rare statement of rebuke against the magazine, saying:

"This story contains a swathe of inaccuracies and false misrepresentations which were not put to Kensington Palace prior to publication."

If only the Palace had stepped in from time to time and defended Meghan the same way. Maybe she and Harry would have felt more supported and would not have felt the need to (a) step down as senior royals, or (b) to move halfway around the world. Just Saying!

* The same cannot be said for her mother, Carole, who is skewered in the piece.