Available to pre-order through Amazon (of course) you will find a biography about Prince Harry and Meghan titled "Finding Freedom". It is written by royal editors Omid Scobie and Carolyn Durand.

Rumours of its pending publication were recently circulating in the UK tabloids, with certain UK newspapers claiming (and this has not been confirmed) that Meghan and Harry gave a behind the scene interview, referenced in the book. 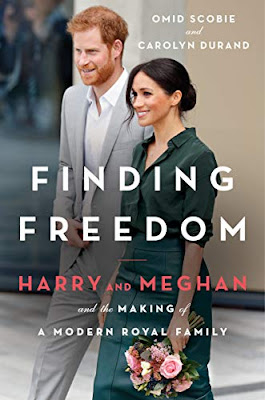 Here is how Amazon describe the book:

“When news of the budding romance between a beloved English prince and an American actress broke, it captured the world’s attention and sparked an international media frenzy. But while the Duke and Duchess of Sussex have continued to make headlines—from their engagement, wedding, and birth of their son Archie to their unprecedented decision to step back from their royal lives—few know the true story of Harry and Meghan.
For the very first time, Finding Freedom goes beyond the headlines to reveal unknown details of Harry and Meghan’s life together, dispelling the many rumors and misconceptions that plague the couple on both sides of the pond. As members of the select group of reporters that cover the British Royal Family and their engagements, Omid Scobie and Carolyn Durand have witnessed the young couple’s lives as few outsiders can.
With unique access and written with the participation of those closest to the couple, Finding Freedom is an honest, up-close, and disarming portrait of a confident, influential, and forward-thinking couple who are unafraid to break with tradition, determined to create a new path away from the spotlight, and dedicated to building a humanitarian legacy that will make a profound difference in the world."