- February 20, 2020
Yesterday it was announced that Prince Harry is set to attend an Invictus Games event in London on February 28th with rocker Jon Bon Jovi. The details of this event were scant, but it is rumoured that Jon Bon Jovi will be reworking one of his songs with the Invictus Games Choir ahead of the 2020 Invictus Games that take place in The Hague this May.


A short video clip has been released today on the @sussexroyal Instagram account showing a spoof exchange of text messages between Jon and Harry, teasing us as to what we can expect to occur on the 28th! 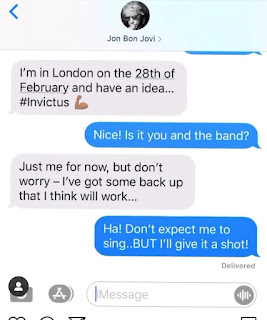 The Invictus Games Choir promotes the recovery and rehabilitation of Wounded, Injured and Sick UK Armed Forces Serving and veteran personnel through music. Check them out on You Tube and on Twitter https://twitter.com/InvictusGChoir