Meghan and Harry issue Statement to Clarify their Transition Plans

Meghan and Harry have released a statement clarifying the plans for their transition to independent people effective Spring 2020 when they step back from being senior working royals. 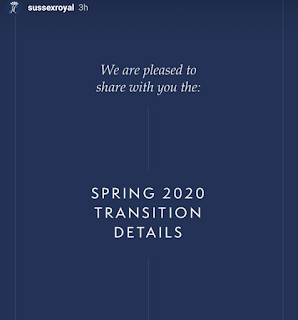 Their statement seeks to correct some of the misinformation that has been released by UK media outlets. It also reaffirms their wish to try to remove what they describe as the media intrusion into their lives which they say the media has justified on the basis that being a working Royal means the press can do and say what they like, justifying it on being in the public interest.

Meghan and Harry confirm that whilst there are no legal barriers to them using the word 'royal' overseas, they will not market themselves nor include the word royal in any non profit endeavors either outside of inside the UK.

The tone of the statement is one of exasperation. Meghan and Harry on several occasions make it clear that their current treatment is different to how other members of the Royal Family have been treated in the past. That despite past precedents, they are being subjected to harsher rules.