20 year old Sheku Kanneh-Mason, the British cellist who won the 2016 BBC Young Musician of the Year award has been awarded an MBE in the New Year's Honours List. Sheku was the first black musician to win the award since its launch 38 years earlier. He played beautifully at the wedding of Prince Harry to Meghan Markle on 19 May 2018 under the direction of Christopher Warren-Green and he also performed at the Royal Variety show later in 2018 which Meghan and Harry attended. Many congratulations. 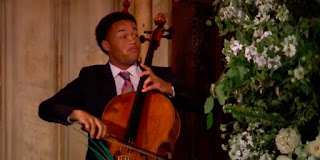 Also in the New Year's Honour's list is the New Zealand born staff member to Harry and Meghan, Clara Loughran. She was awarded a Member of the Royal Victorian Order. The prestigious accolade recognizes distinguished personal service to members of the monarch's family.

Per a report in the  Montecito Journal  Prince Harry and Meghan Markle were first to come forward to sponsor a “Holiday Magic” themed 1st Annual Montecito Holiday Car Parade. The parade saw children, adults and family pets alike line the street to watch cars and vehicles bedecked with Christmas lights and tinsel pass them by, with Santa making a star appearance.  Photo from the Montecito Journal
Read more