- November 02, 2019
The Duke of Sussex in Japan to support England in the Rugby World Cup was humble when the South African team defeated England by 32-12.

Harry was quick to congratulate South African president Cyril Ramaphosa for his country's emphatic win. President Ramaphosa was sitting close by Harry at the Yokohama stadium and the two were pictured hugging after the game. They had of course recently met during Harry and Meghan's tour of South Africa. Harry has since posted a message of congratulations on his and Meghan's Instagram account reading:

"To the whole of South Africa - rugby unites all of us in more ways than we can imagine, and tonight I have no doubt that it will unite all of you.

After last months visit, I can’t think of a nation that deserves it more. Well done and enjoy! Arigatu gozaimasu Nihon” 🇯🇵 - The Duke of Sussex

Whilst in Japan, Harry was able to fit in an another engagement viewing a purpose built arena for disabled sportsmen and sportswomen and meeting some Japanese athletes trying out for the Para Olympics. 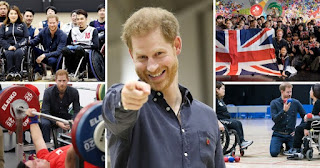 2019 marks the 30th anniversary of the first Para Olympic Games. Japan will be hosting the Olympics next year in 2020.