- November 08, 2019
Young Archie is accumulating a big collection of sports shirts as a result of the work his parents the Duke and Duchess of Sussex undertake. Today, Prince Harry along with rugby player Gareth Thomas (pictured to the right of Prince Harry) met at the rugby club Harlequins in London to mark National HIV Testing Week which starts on November 16th. Gareth has HIV and continues to live a healthy and fulfilling life. 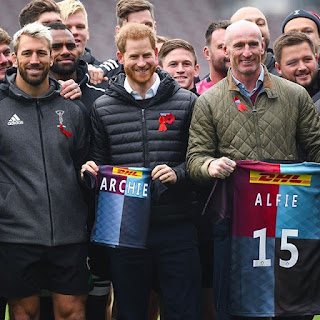 Prince Harry and his brother Prince William are continuing the work started by their mother Princess Diana in advocating for HIV awareness and promoting HIV testing and in trying to eradicate the stigma surrounding HIV and those diagnosed.

Prince Harry and Rhianna both took a much publicized HIV test in 2016 which resulted in a huge increase in people getting tested.

Today's event was sponsored by the Terrence Higgins Trust, the largest voluntary provider of HIV services in the UK. The Trust has the aim of ending new HIV transmissions in England by 2030.

Whilst the topic today was a serious one, the playfulness of Gareth Thomas was evident. 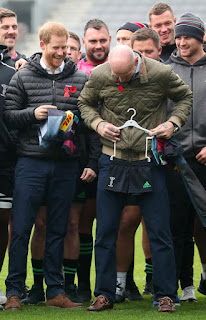