Here is an article by Jacqueline Maley, Columnist and senior journalist, posted to the on-line version of the Sydney Morning Herald:


Meghan Markle’s crimes against the British monarchy have been mounting steadily ever since she got that funny American bishop to officiate at her wedding to Prince Harry, and then wore blue jeans to Wimbledon – a breach of Royal protocol rarely seen since Henry VIII invented a new church so he could marry his mistress, before going on to order her execution. 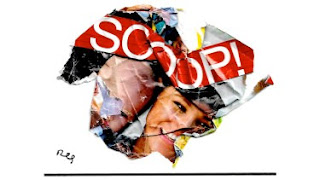 We must know our history in order to avoid repeating it, and perhaps Meghan should have brushed up on the Tudor period before she married her prince. According to a documentary previewed this week, the American actress’s British friends warned her about the dangers of princess-dom. These days they don’t literally kill you, of course, they just slowly strangle your soul, the tabloids pecking you to psychological oblivion because you wore an off-shoulder frock to an important dressage event, or something.


As a quick catch-up for those whose personal priorities don’t include an interest in princessly manicures, Markle has been criticised in the British tabloids and beyond for transgressions including, but not limited to: giving a toast at her own wedding, not parading her baby for the paparazzi immediately following his birth, wearing too much makeup, carrying her handbag the wrong way, holding hands with her husband in public, accepting a ride on Elton John’s private jet, and yes, for painting her nails a dark colour instead of the discreet nude shade centuries of Royal tradition demands.

Probably my favourite part of the egregious media coverage of Markle is the fact that she is always referred to by the 1950s-era epithet “divorcee”, and we are reminded how edgy it is for a royal to marry one. No one ever mentions the fact that the divorcee is marrying into a family that literally invented divorce back in the 1530s, before turning it into a bloodsport in the 1990s. As her critics are at desperate pains to point out, it is true that no one has ever openly and publicly criticised Markle for her race. That has only happened, torrentially, on social media and the Internet. And those things are pretty easy to avoid, right?


I digress. Meghan’s latest treasonous act was to appear in a documentary, titled Harry and Meghan: An African Journey, and answer honestly a question about how she was coping with the onslaught of negative media coverage, coinciding with her new motherhood. She responded in a muted way, by agreeing it was fair to say she was “not okay”, and admitting it had taken its toll on her privately. She also made the uncontroversial point that having a new baby is a vulnerable period anyway, for any woman.

Oh, but she is so privileged, came the cry. How dare she complain? She has staff, dresses, jewels and many more houses than she requires. She has her own custom-built yoga studio.


This argument might be easier to buy if it wasn’t made by the same people (and tabloid papers) who also bellow their disapproval when non-privileged people – the poor, refugees, welfare-dependent people, for example – pipe up about the hardships they endure. It quickly becomes obvious that it is not the hardships people quibble with, so much, it is the piping up they dislike. And that says something interesting about what we expect of women in general, and of new mothers in particular.


The same rich vein was tapped by my own employer this week, when The Age published a sexist Michael Leunig cartoon depicting a mother so absorbed with looking at Instagram on her phone that her baby falls out of the pram “unseen and alone”. The cartoon outraged mothers and the people who support them. It doesn’t matter if you’re in a palace or pushing a pram alone along St Kilda Road. Any woman who has experienced the isolation and sleep deprivation that comes with a baby knows that for a society that publicly lauds the sacred nature of motherhood, we can be terribly cruel to mothers themselves.


I have noticed that in all of the coverage of Meghan’s silly, self-indulgent feelings, no one seems to dispute they truly exist. Most people with a pulse can understand why a new mother might feel a little vulnerable when in a strange land, subjected to constant nasty press and marooned in a gilded palace-machine with frosty in-laws, no real friends and a bunch of staff who are probably spying on you.

It is not the feelings, it is the talking about the feelings that makes people uncomfortable, and angry. Isn’t that odd? And what does that say about us?


A common argument made in the backlash against the #metoo movement is that women have taken it “too far” by complaining about physical or verbal infractions which make them uncomfortable but which do not amount to criminal conduct. Nobody can dispute that a hand on a leg or a tasteless sexual joke might make a woman feel bad. The problem is that she now has license to publicly call it out. The transferral of that discomfort – from the person experiencing it, to the person or systems causing it – is apparently too subversive to bear. What those people are saying, essentially is, yes, you are uncomfortable, or anxious, or sad or distressed. But we want you to endure it silently.


This is a beautifully conservative position, because it enables the status quo to continue. You will receive no prize for guessing who benefits from that.

Jacqueline Maley is a senior journalist, columnist and former Canberra press gallery sketch writer for The Sydney Morning Herald. In 2017 she won the Peter Ruehl Award for Outstanding Columnist at the Kennedy Awards.