Penultimate Day of Tour of Africa - Duchess of Sussex

Meghan continues her solo engagements in Joburg today. Her first appointment was in her role as Patron of the Association of Commonwealth Universities (ACU), a role that she took over from the Queen this past January.

During round table discussions the Duchess talked about the challenges facing those seeking to attend higher education particularly women. She talked of the importance of accessibility to education and also how education can empower women and have a positive effect on their communities. 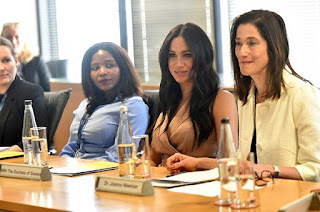 She also announced 4 new Queen Elizabeth Commonwealth Scholarships which will be given to students from Tanzania, Zambia and Nigeria to study in South Africa next year. The importance of these scholarships cannot be underestimated. Education costs in Africa, whilst on their face are less expensive than the costs for attending university in Europe, the USA and Canada, they are still prohibitive to many students living in lower and middle income families throughout Africa.