Pending the arrival of Harry from Malawi, Meghan undertook her own engagements in Johannesburg today visiting artisans at the Victoria Yards and visiting with children at other supportive programs.

Victoria Yards in Lorentzville is described as an urban village-environment for crafters and artists to work, collaborate and exhibit.
The official Johannesburg leg of the royal tour kicks off on Tuesday and will end with a meeting with President Cyril Ramaphosa in Pretoria on Wednesday.
Speaking to Channel24 about his once-in-a-lifetime meeting the duchess, artist James Delaney, said: "We were told in the morning to expect a very important guest later in the day, and that the complex would be shut down from 13:00."
Although they weren't told precisely who their very special guest would be, James said that the tenants quickly figured it out, as it was already known that "Meghan was in town."
Anyone who has travelled in Africa will be aware of the stark difference between Cape Town (which on the surface is not much different to many European cities) and rural / regular Africa where the housing and way of life is far less refined by western standards. If you check the background to the photos posted today, the crumbling edifices of the buildings is not un-typical of what you see in many rural African towns, along with roads full of pot-holes if they have tarmac, and locals having to cope with loss of power and water on a daily basis. When we talk about being sustainable, many Africans recycle and reuse out of necessity and not because it is the 'in' thing to do. Same with food - every part of a slaughtered chicken can be and is often eaten. 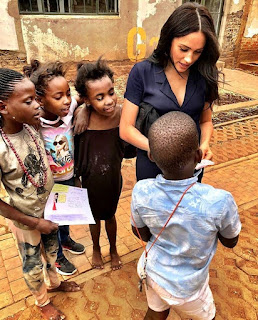 I am really hoping that during this royal tour Meghan and Harry will experience and talk about and show us the reality of life for most 'regular' Africans.Those of us living in western or richer countries need to see how lucky we are and see how much we take for granted.